The Responsive Dome Environment (RDE) is the central design artefact that has been produced as a result of Scott Brown’s PhD research. This space was developed over several iterations, based on the situated feedback of autistic and neurotypical children and their parents.

As the site for non-directed and playful interactions, the RDE allowed children to develop an understanding of their agency through explicitly mapped feedback of the lighting and sound system around the dome-like structure.

The structure and aesthetic considerations of the audio visual system around the RDE both contained the interaction space and created an environment that was welcoming and controlled. This assisted with growing the relationship between the participants and researcher, with children and their parents returning for three stages of the RDE study over 12 months.

In the final iteration of the RDE, the mapping of feedback between the interface and system output was disrupted over time. This led to observable and repeatable triggers toward social interaction between child and parent, for example, the child asking their parent for assistance or clarification on why the system no longer responded as they would expect.

These behaviours have led to the primary outcome of Scott Brown’s PhD thesis, as an interaction design research approach to eliciting feedback from neurodiverse groups. Brown plans on expanding upon this research, both through further studies using this research method and continued development of the RDE as an experiential environment for neurodivergent children. 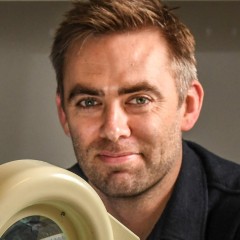 I am a Lecturer at UNSW Arts, Design and Architecture using interactive technologies and human-centred design approaches to work with neurodiverse populations. Based in the School of Art & Design, I bring a UX and media arts perspective to inclusive design and assistive technology. My teaching and research practices examine creative implementations of embodied and sensory interaction and the value of accessible technology in eliciting social engagement between people. View all posts by Scott Andrew Brown
Skip back to main navigation
Loading Comments...